After a three-year hiatus from seminars and presenting in hotel rooms I did a Webinar for a sales club I am in.

A pretty straightforward seminar, which had them lay out their hopes and dreams on the seven areas of their lives, times three time periods, Long term, (two years or more) medium term, ( One year), and short-term, (ninety days).

In a little over an hour, I had people go from thinking about vague possibilities, to probabilities, to definite plans! It was on Zoom, so I saw their expressions change as this became real to them.

Not everybody, not every goal, but enough to know we had made a difference!

The interesting thing is it was their hopes, their dreams, and several people told me they had wished for these same things, but seeing them written down, in their own handwriting, made it tangible for them.

So, what are you wishing for? What are your dreams and aspirations?

Let me know, maybe I can help maybe I can’t, but you will be closer to achieving them than you are now.

Until we chat again,

Click on the book to get more information about Wayne's latest book, "31 Days"! 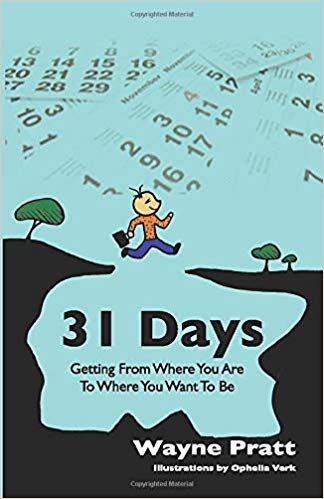 Click on the book to get a FREE copy of Wayne's previous book!